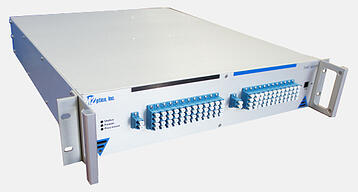 Based on a patent-pending design, SwitchLight™ utilizes both active and passive optical components to perform the following “S.M.A.R.T.” functions:

SwitchLight™ customers can customize their systems to include one or all of these functions in a small 1 or 2U form factor. As these needs change over time, SwitchLight™ can be expanded to increase density or add functionality.

Setting SwitchLight™ even further apart from the competition is its ability to perform all of these functions under LightClick™, the SwitchLight™ Element Manager included with every system. Based on HTML 5, LightClick™ provides rapid system reporting, point-and-click provisioning, and enhanced administrative control. Additionally, LightClick™ comes standard with multiple APIs to seamlessly integrate into existing and future environments.

“While customization scares many companies due to the increased cost and complexity, we made SwitchLight™ flexible enough to embrace customization while remaining cost effective. Also, the combination of SwitchLight™ and LightClick™ enables us to address everything from 100+Gbps test environments requiring simple scripting languages to next-generation networks built on SDN architectures,” says O.J. Johnston, General Manager of M2 Optics Switching Systems division.

The capabilities, features, form factor, and low cost of SwitchLight™ results in a unique value proposition for M2 Optics’ customers. SwitchLight™ is available worldwide from M2 Optics or any of their authorized regional partners.