The Positive Impact of Using Optical Fibers on Cell Towers

While fiber optic technology has been utilized for many years in the communications industry, consumers generally identify with the role that it plays in wired communications such as Cable TV, Fiber-To-The-Home, and the related networking equipment.  However, what most overlook or do not realize is the significant impact that deploying optical fibers has also had on something consumers use every day – mobile devices.  In order to achieve the high speed data levels that we have become accustomed to when using mobile devices, cell towers and their supporting networks had to be retrofitted with optical fiber cables.

The transition from copper to fiber first started when 3G mobile technology was first introduced, but when 4G LTE technology was deployed, the service providers’ equipment in almost every cell tower had to be upgraded.  The primary reason for this was to support the need for the higher frequencies and faster speeds that the existing 1 5/8 ” coax cables on most cell towers could not handle. Since the primary feed line to most cell towers had been upgraded already, connecting the cell systems in the towers with fiber was the next step. 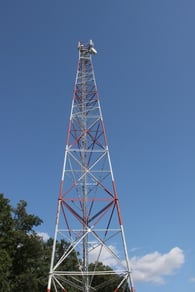 So what positive changes occurred when transitioning to optical fiber in the cell tower?

First, engineers could now design systems with fiber that run solely off of DC power.  The result was that a very small (less than a ½” in diameter) 16-pair optical fiber cable and two small multi-strand DC cables could replace as many as 12 to 18, 1 5/8” coax cables which are sometimes called “hard lines”.  As you can see, this is a significant improvement.

Secondly, after the hard lines are taken off and replaced with optical fiber cables, both the weight and wind drag are drastically reduced on the cell tower.  The amount of weight and wind drag that is reduced when swapping coax for a fiber-based system is almost unbelievable.  Thousands of pounds of materials are removed and space on the tower is dramatically increased.  In addition to amount of material, a lot of time is saved in comparison to having to add 12 to 18 more hard lines to each system.

By upgrading to incorporate optical fiber cables into the infrastructure, today’s cell towers have realized significant improvements not only in mobile network performance, but also from an architectural standpoint.