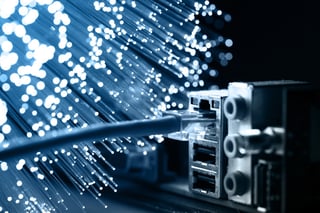 The first instances of glass being drawn into fibers date back to the Roman times, however it was not until the 1790’s that a pair of French brothers named Chappe, invented the first “optical telegraph”. This primitive system was made up of towers outfitted with a series of lights that operators could use to relay messages back and forth.

Throughout the next century, historical developments would be made in the field of optical science.

A Brief History of Fiber Optics

Starting in the 1840’s, physicists Daniel Collodon and Jacques Babinet demonstrated that light could be directed along water jets for nighttime fountain displays. Later, in 1854, British physicist John Tyndall proved that light could travel through a curved stream of water. Using a tank of water with a pipe that ran out of one side, Babinet then shone a light into the tank, into the stream of water. An arc of light followed the water as it fell.

An optical telephone system was patented in 1880 by Alexander Graham Bell. Bell’s “photophone” never panned out and his earlier invention the telephone proved much more successful. Later that same year, William Walter tried his hand at inventing a series of light pipes lined with a highly reflective coating that illuminated homes by utilizing light from an electric arc lamp located in the basement of the home. The light was then directed through the house with a series of pipes. This method proved to be ineffective and was quickly dismissed as Thomas Edison's incandescent light bulb flourished.

Bent glass rods were used by physicians Roth and Reuss in Vienna to illuminate body cavities in 1888. This was followed by French Engineer Henri Saint-Rene who utilized a series of bent glass rods for guiding light images, an early attempt at television. In 1898, American David Smith patented a dental illuminator that relied on a curved glass rod.

In the 1920’s John Logie Baird obtained a patent for using arrays of transparent rods to transmit images for television, while Clarence W. Hansell used the same configuration to create facsimiles. During 1930, Heinrich Lamm successfully transmitted and images through a bundle of fibers. The image was of a light bulb filament. Lamm intended to use this system to look inside the human body, however with the shift in power during World War II, he was forced to abandon his work and seek asylum in America. He made an effort to file a patent but was denied because of Hansell’s British Patent. In 1938, Alec Reeves at the International Telephone and Telegraph Company research laboratory in Paris discovered that telephone signals could be converted into digital signals for transmission and then back to analog form for delivery. This idea was based upon a system known as Pulse Code Modulation; during PCM the amplitude of an analog signal is periodically sampled and then translated into a digital binary code. He was unable to find a practical application for this using the technology of the time and PCM was finally used in 1962 by AT&T.

Danish physicist Holger Moeller, applied for a patent in 1951 for fiber-optic imaging. He proposed coating glass or plastic fibers with a low index material. His patent was denied because of Baird and Hansel’s patents. Three years later Abraham Van Heel and Harold H. Hopkins debuted imaging bundles at two different times in the British journal Nature. Later, Van Heel produced a cladded fiber system; it showed a great reduction in signal interference and issues between fibers, like crosstalk. At Columbia University, in 1954, Charles Townes and his colleagues developed ‘maser’. Maser stands for “microwave amplification by stimulated emission of radiation”.

Not until 1958 was the laser introduced as an efficient source of light. Charles Townes and Arthur Schawlow intended to show that masers could operate in optical and infrared regions. Light is reflected back and forth to generate amplified light, as opposed to excited gas molecules being amplified to generate radio waves, as in the maser. The first continuously operating helium-neon gas laser was invented and tested in 1960. That same year, using a synthetic pink ruby crystal, an operable laser was invented.

Elias Snitzer of American Optical published a 1961 theoretical description of single mode fibers, with a core so small that it could carry light with a single waveguide mode. He was able to demonstrate a laser directed through a thin glass fiber that had implications in medicine, but suffered too great a light loss to have any communication applications.

In 1964, Charles Kao and George Hockham from Standard Communications Laboratory in England published a paper that demonstrated, in theory, how removing impurities from glass fibers could dramatically improve light loss.

It was not until 1970 that scientists at Corning Glass Works created a single mode fiber that had less than a 20dB/km attenuation. This result was achieved by doping silica glass with titanium. The attenuation barrier was broken by four scientists at Corning Glass Works, Robet Maurer, Donald Keck, Peter Schultz and Frank Zimar are creditd with the accomplishment. Bell Laboratories, along with Morton Panish, Izuo Hayashi and a group from the Physical Institute in Leningrad showcased a semiconductor diode laser that could emit continuous waves at room temperature in 1973.

In the late 1970’s and 1980’s, telephone companies began to use fiber extensively in their communications networks. In the mid-1980’s Sprint founded the first nationwide, 100 percent digital fiber network. A reduction in the cost of long distance systems came in 1986 with the erbium-doped fiber amplifier developed by David Payne of the University of Southampton and Emmanuel Desurvire at Bell Laboratories. The first transatlantic telephone cable went into operation in 1988 utilizing Desurvire’s laser amplification technology.

Debuting in 1991, Desurvire and Payne demonstrated optical amplifiers that were built into the fiber-optic cable itself. This all optic system could support more than 100 times more information than a cable with electronic amplifiers. Also in 1991, photonic crystal fiber emerged. Guiding light by means of diffraction, this fiber allows power to be carried more efficiently than by conventional fibers.

The TPC - 5, an all-optic fiber cable that uses optical amplifiers was laid across the Pacific Ocean in 1996. The next year Fiber Optic Link Around the Globe or FLAG became the longest single cable network on record and is the base for the next generations of Internet applications.

Today’s technology finds fiber optics in many industries, in a variety of applications. Military, medical, telecommunication, data storage, networking, industrial, and broadcast industries have all found ways to utilize this versatile fiber.

M2 Optics has been the market leader for designing and manufacturing customized optical fiber solutions for fiber optic network simulation, monitoring, and testing applications since 2001. In fact, we help many of the most recognized Communications Service Providers, Equipment Manufacturers, Data Centers, Financial Institutions, and Government Agencies around the world.

Need to know more? Check out our custom solutions. When you need to save time and money while using Corning, OFS, and Draka/Prysmian® fibers for testing, do not hestiate to call M2 Optics.